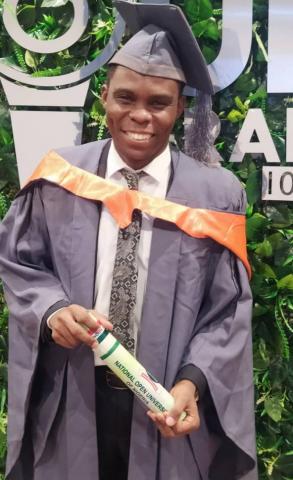 Mr. Taiwo Ogunlaiye, a student of Economics at Lagos Study Centre of the National Open University of Nigeria (NOUN) has emerged Best Graduating Student of the university in 2020. In this chat with TOPE OYEWOLE of NOUN News recently at the centre, the 1st Class graduate bared his mind on how his academic voyage had been and how he accomplished the feat. Excerpts:

Hello Sir, can we meet you?

My name is Ogunlaiye Taiwo from Lagos State. I am 30 years old, single; fourth and last child in the family.

How did your journey start at NOUN?

I gained admission at NOUN in September 2015, having applied to study Economics. The system of education at NOUN was altogether new to me because it wasn’t conventional. However, along the line, I realized that the system suited me perfectly. Tertiary education at the National Open University of Nigeria requires studying at one’s pace and in one’s privacy; two things that I greatly enjoy. With a very good grade in Economics at the secondary school level and an overflowing desire to alleviate poverty and improve the standard of living of so many people, I knew Economics was the best fit for me.

My study at NOUN was a bit lonely but never excruciating. I had to rely a lot on the large volume of highly effective course materials which the university provided. NOUN course materials are indeed highly commendable. I still use them till this very day. I didn’t really make friends at NOUN. I knew just five students and we got along quite well in the few years we spent at the university. This is understandable because NOUN is most suitable for working class people; working class people are busy most of the time. Studying at NOUN worked a lot for me because I am and have always been an independent learner. I already had a penchant for studying, so reading wasn’t stressful for me. I knew I would graduate with a First Class Honours degree because I really enjoyed Economics. I took my studies very seriously because I had several goals in mind. My desire was to stick to my plan and achieve all my set goals. At some point, as the A grade kept rolling in, I suspected I might become a best graduating student. Today, I am happy that that dream has come true.

Some students do have challenges in paying tuition, how were you able to fund your programme?

While I studied at the National Open University of Nigeria, I was working as a

Physics teacher at Marybene College. I taught Physics and Basic Technology to secondary school students and earned a monthly salary for my effort. I saved up a portion of my monthly salary for my tuition at NOUN. Since I was never a lavish spender, I knew how to manage my money and therefore never really encountered financial challenges. I do not buy what I do not need, and I do not go around trying to compete with my friends. I always draw out a financial plan for whatever it is I want to do.

What advice would you give to students who are studying at NOUN at present and those who are aspiring to come in?

Studying at NOUN is not a child’s play. It requires being serious and studious. That you attend NOUN does not mean that you will get high grades cheaply. Examinations at NOUN are highly standardized and it is only diligent students that will reap the fruit of their labour; while indolent students will meet their waterloo; this is how NOUN works. You can excel if you study very well. Do not study just to pass your examinations. It is more rewarding when you study to know. I studied to know; that is why I could answer questions qualitatively and quantitatively. I read several textbooks on the same topic, and that helped me a lot. Achieving excellence comes with a lot of benefits. I know I am reaping the fruit of my labour today. Keep working very hard, and always pray to God for His guidance and protection. Even if you have experienced failure in the past, never stop believing that you have the potential to excel. Excellence is within you; all it takes to attain it is to work hard.