No room for ‘sorting’ in NOUN, Iwuchukwu tells freshmen 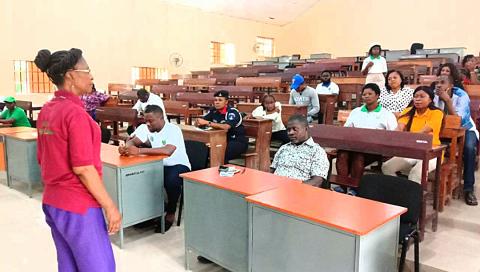 The Director, Calabar Study Centre, National Open University of Nigeria (NOUN), Calabar, Cross River State, Prof. Onyekachukwu Iwuchukwu, has warned freshmen at her centre that there is no room for ‘sorting’ at NOUN.

Iwuchukwu sounded the warning to the newly admitted students of the Calabar Study Centre in her opening remarks to flag off the 2022_2 Orientation Exercise organised by the centre to formally induct them into the academic tradition of the West Africa’s premier Open and Distance Learning (ODL) university on Friday, September 23, 2022 at the study centre.

She explained that NOUN is unique and its uniqueness “is manifested in the new motto of the university ‘Learn at any place, at your pace,’” adding that the university is flexible, cost-effective and offers a second-chance university education for those who missed it early in life due to lack of funds, early marriages or other circumstances, as well as offering qualitative learning opportunities for those who wish to study for postgraduate qualifications up to doctorate level.

While emphasising that NOUN operates a do-it-yourself (DIY) mode of learning, she reiterated that there is no room for ‘sorting’ and that the university has zero tolerance for examination malpractice; even as she charged the students to participate actively in academic conversations on their respective departmental and faculty media platforms as well as meeting their faculty desk officers whenever they have challenges.

Iwuchukwu further admonished that students should freely come to her whenever they felt that any solution proffered to them by the desk officers were inadequate. "My doors are always open to attend to you on issues that are beyond the faculty desk officers.”

Different heads of units took turns to sensitise the freshmen on the workings of their units towards the enhancement of their seamless learning experience at the university. Other officers who made presentations at the event included Mr. Matthew Akpan, principal assistant registrar; Mr. Sidney Ibe, centre accountant; Mrs. Ann Owan, store officer; Dr. Nnenna Nnodi, centre counsellor and Mr. Ben Onabe, system analyst.

There was a question and answer session as well as light refreshment for all present.