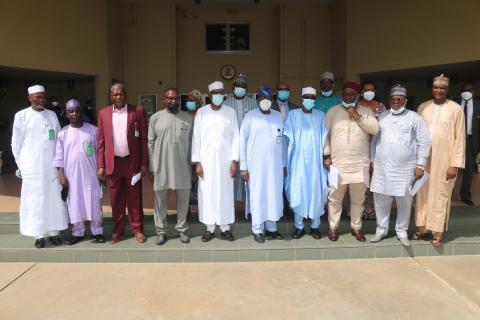 The Vice-Chancellor, Prof. Olufemi Peters, on Thursday, July 1st 2021, led a high-level team to a courtesy call on the Honourable Minister of the Federal Capital Territory (FCT), Mohammed Musa Bello, where the university tabled certain “critical areas of possible collaboration.”

Peters said the visit was further to a similar one organized by the Presidential Visitation Panel to NOUN, back in May, 2021, where the minister offered certain suggestions to the university for a possible collaboration.

And it was against this backdrop, the VC, explained, that the university management explored “requests the Honourable Minister to kindly allocate land to the university for staff quarters and recreational facilities.”

He premised this to the widely-known formal operations of all universities that require dedicated, bounded areas for staff quarters and recreational facilities, and with the fact that “NOUN, being a late entrant to the FCT,” is presently confronted with this challenge.

The Vice-Chancellor urged the FCT administration to install traffic lights at the major junctions on the road and street lights to illuminate the road so as to enhance traffic flow and security.

“Also,” the Vice-Chancellor continued, “there is a stream that traverses our university leading to frequent flooding, environmental degradation and hazards. In order to forestall the continued degradation of the environment, the university wishes that the FCT intervenes with the construction of a bridge and reclamation of the land.”

While turning on the need for field experience for students in education, health sciences and other fields, Peters informed the minister of the challenges faced by NOUN students within the FCT bureaucracy, and appealed to the minister to intervene towards the development of a partnership that will aid students’ teaching practice, industrial training, clinical postings and practicum.

In a gesture to return the anticipated favour, the university equally offered to enhance the FCT public school teachers “on pedagogy and ICT in education; civil servants for service delivery in public sector and entrepreneurship education for youth.”

NOUN also offered to undertake certain studies in the areas of environmental pollution and traffic congestion   with a view to proffering solutions.

In his response, the minister having listened with keen interest, expressed his delight on the quick response the management applied on the issue as discussed, which emerged during the last visit with the Presidential Visitation Panel.

Bello, who gave positive responses to the pleas made by the university, disclosed that “I am very pleased with the professional way the Vice-Chancellor has created a very good roadmap for us to follow. I am not surprised it’s coming from Prof. Peters.”

On the need for a land allocation, the FCT minister stated that “we have made a form available for you to fill based on the conditions indicated and clearly specify the requirements and we will see what is possible because we know how important an institution like yours is.’’

Dwelling on the traffic gridlock and the street lights, the minister termed it as “traffic indiscipline” from commuters, expressing displeasure on those who decide to use the shoulders of the road and violating orders.

While stating that the road is presently in a temporary state, which made it impossible to install street lights, he nonetheless told the VC and his entourage that “we will provide an interim measure and deploy stand-alone solar light on the portion of the road.”

On the issue of students training, Bello also stated that it can be surmounted, urging the VC to assign the Registrar who will work with the FCT’s Human Resources to form a 2-man committee that will work out specific requirements, number of disciplines and institutions required, for an MoU to be signed between FCT and NOUN. “We will work closely with your organisation for everybody’s interest,” he added.

On the flooding challenge in the university, he assured that “I will send a team to look at it and like I promised, I will also pay you a visit to have a look at it. “What is possible we can do, what is not possible in this year’s financial circle, we can look at other means.’’

He also welcomed the offerings from the university in the areas of capacity training, researches and studies aimed at solving some of the challenges in the FCT.