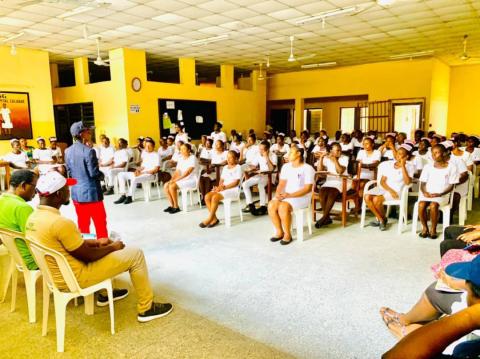 Prof. Iwuchukwu (standing)addressing the student nurses during the visit

Iwuchukwu expressed her gratitude to Iwara for the warm reception the later accorded her team.

She informed the permanent secretary and his members of staff that Calabar Study Centre, one the two centres of the university in the state, was one of the first study centres NOUN established in the country.

"The second study centre of NOUN in Cross River State is Ikom Community Study Centre in Ikom," she revealed

She explained that the aim of establishing the study centres by NOUN was to bring university education to the doorstep of all Nigerians.

"There are many advantages for civil servants to enroll and study at NOUN, these include studying at one's pace at anywhere he/she is or chooses," she added.

Iwuchukwu posited that the main objective of her centre was to increase students enrollment, thereby enhancing the university's mission of taking university education to the doorstep of all Nigerians, emphasising that NOUN admits as students, people of all works of life and age groups.

In his response, Iwara thanked Iwuchukwu and her team for the visit. He conceded that education is the key to success, and promised to reach out to all the departments in his ministry with the good news, "especially as the various directors were on ground to receive and to listen to the presentation of the NOUN delegation," he said.

While confessing that not much was known about NOUN in the state, Iwara, however, was delighted that Iwuchukwu was determined to make the difference through her vigorous advocacy drive "that would certainly increase student enrollment at Calabar Study Centre."

The permanent secretary pledged to join the advocacy to take the NOUN gospel to as many people as he could reach to ensure that the centre director's vision of expansion is achieved.

Similarly, Iwuchukwu also led her team to the School of Nursing, University of Calabar, where they were received by the duo of Mrs. Arit Ironbar, principal, and Mrs. Item Akpan, vice-principal.

Iwuchukwu explained that NOUN was poised to take tertiary education to the doorstep of all Nigerians.

She emphasised that all academic programmes at NOUN were accredited by the National Universities Commission (NUC).

She explained the admission requirements and procedures as well as the mode of instructional delivery especially on the Bachelor of Nursing Science programme.

Iwuchukwu underscored the flexibility of NOUN mode of education delivery especially as regard temporary and permanent transfer of personnel from one place to another.

There was a session for questions and answers, after which a vote of thanks was given by the students' union leader, Miss Mercy Ekpali.

In the NOUN delegation, with the centre director were Mr. Matthew Akpan, PAR, and Mr. Jerry Achigbe, systems analyst.