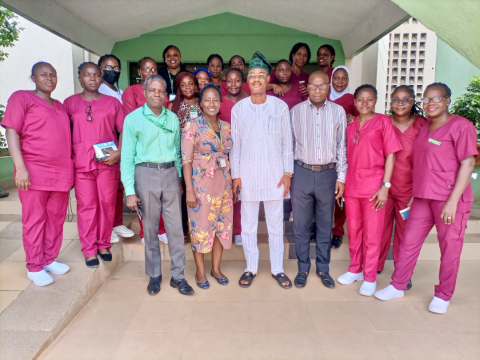 The B.Sc Nursing students of the National University of Nigeria, (NOUN), Abeokuta study centre have organised a health talk and medical check-up for the centre staff and students.

The speaker, Mrs.Awodele Lateefat Abimbola while addressing the audience on Monday, July 4, 2022, said past generations used to visit doctors only when they were sick or dying, but today preventive care is becoming a practice as individuals become more educated and empowered about their health status.

Emphasis was laid on groups of people from fourty years old and above, as they were advised to cultivate the habit of regular/routine medical check ups, and to maintain a healthy lifestyle .

The speaker also highlighted some deadly illnesses such as hypertension (high blood pressure), diabetics, strokes and other health issues which are common causes of sudden death nowadays.

The speaker further stated that such illnesses could be prevented or cured if diagnosed and attended to on time.

The staff and students were sensitized about the causes of hypertension, smoking, alcohol consumption, overweight/obesity, older age, stress, lack of physical activity, salt, and genetics.

Following the talk, participants were subjected to various medical tests such as blood pressure, blood sugar level, and oxygenation.

The centre director, Dr. Adeleke Oba- Olusegun, while giving his closing remarks, advised the Nursing students to diligently pursue their academic programmes in the university in order to achieve a good result.

He also advised the students to always perform their duties with  passion in their various hospitals and to be of good conduct as they're ambassadors of the University anywhere they find themselves.

At the close of the event, the director gave the vote of thanks and group photos were taken.