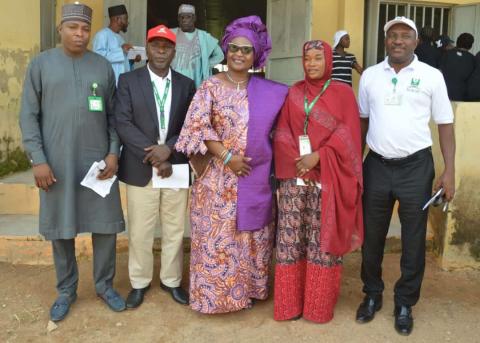 The Kaduna Study Centre of the National Open University of Nigeria (NOUN), under the leadership of its director, Malam Yusuf Abdullahi, has taken its ongoing advocacy campaign to the Federal Government Girls College (FGGC), Zaria

The campaign was aimed at intimating the young prospects about NOUN as an alternative to conventional university system and the opportunity it comes with.

In his speech, the director explained that the university is affordable, accessible and flexible, and further provides a level playing field for people to study at their own paces.

He urged the staff and students of the college to seize the opportunity brought to them by the 21st Century university.

Abdullahi added that there are so many benefits to harness when one enrolls into the university.

Responding, the principal of the college, Mrs. Gladys Ibrahim Asibi, who received the delegation, applauded the university for the visit and thanked the advocacy team for giving them due consideration and priority.

She also promised to support all her staff who may decide to enroll for any available programme especially those related to education.

Questions were entertained by the director and his team as staff  and students sought for clarifications and answers from certain relevant issues.

At the end of the interaction, advocacy souvenirs were presented to the principal other staffers, as well as the head girl of the college.