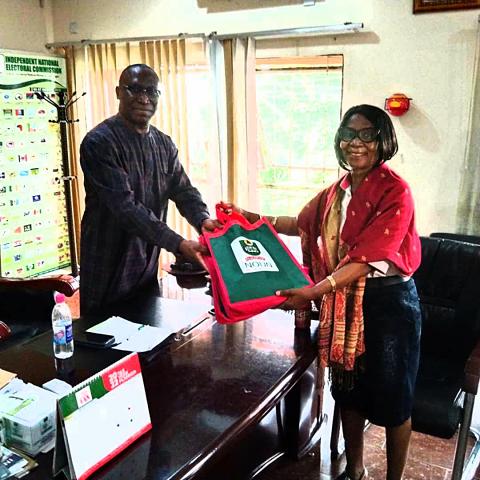 The Cross River State resident electoral commissioner, Dr. Cyril Omoregbe, who was visibly delighted at the visit of the NOUN team, said, in his welcome remarks, that it was ironical that his commission and the study were neighbours but he did not understand the system of operation of the university.

The director, Calabar Study Centre, Prof. Onyeka Iwuchukwu, expressed her appreciation for the warm and cordial welcome accorded her team by Omoregbe.

Iwuchukwu explained that NOUN had the mandate of taking university education to the doorsteps of all Nigerians who desire it and are qualified, adding that the university was established to give a second chance education on choice undergraduate and postgraduate programmes.

The centre director expatiated on the merits of enrolling at NOUN, especially on the flexibility attribute of the mode of instructional delivery the university affords learners to study from the locations and at their own pace.

She also explained the ease of transferring from one centre to another as well as deferment of exams and on virtual exams opportunity.

Iwuchukwu’s presentation elicited a myriad of questions, from participants mostly heads of various departments in the commission. The questions were satisfactorily resolved by the centre director.

The interaction revealed that some of the staff of the commission were graduates of NOUN, while many others were in various programmes at different levels at the university.

The resident electoral commissioner promised to further invite the advocacy team during his meeting with the zonal and local government heads; this, he said, would enhance the dissemination of salient information on the operations of NOUN to all sections of the commission in the state.