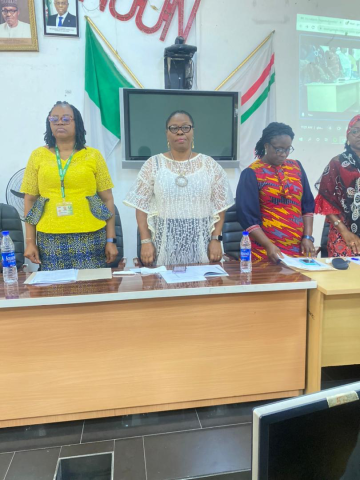 The Lagos and Mushin Study Centres as well as Iwo Community Study Centre of the National Open University of Nigeria (NOUN), have held separate semester orientation programmes for the newly admitted students of their centres.

Speaking during the exercise held at university’s study centre in Mushin, the centre director, Dr. Mrs. Yemisi Ogunlela welcomed students into the university and congratulated them for making the right choice of institution in pursuing their academic career.

Represented by the Principal Assistant Registrar (PAR), Mrs. Ejiro Ojo, the director  informed the students about the necessary information on NOUN policies, activities. vision and mission as well examination conducts, amongst others.

The centre’s students' counsellor, Mrs. Alli Abimbola, also urged the freshmen to always visit the counsellor as someone to whom they can relate especially when facing any challenges during their course of studies.

In the same development, at the Iwo Study Centre, the orientation programme was facilitated by the centre director, Dr. Musibau Olabamiji Oyebode, led the new students to familiarise themselves with the members of staff.

Oyebode also intimated them about the university, the faculties, courses as well as the rules and regulations in operation at the institution.

At the Lagos Study Centre, the programme was held virtually and physically, beginning with an introductory presentation by the study centre director, Dr. Mrs. Alero Akujobi, who enthusiastically welcomed the new students.

Akujobi commented that the orientation programme was intended to familiarise the freshmen with NOUN policies and practices as well as to provide the necessary information.

The director also emphasised on the NOUN ODL mode of learning as the students can learn at their own pace and place.

Talking about examination malpractice, she urged the students to concentrate on their studies and actively participate in academic conversations with their respective department and faculty media platforms.

The centre’s students' counsellor, Mrs. Caroline Agbogidi, advised that the students should complete their registration on their own rather than paying crooks who frequently hand them forged registration forms.

Deputy Registrar, Mrs. Mana Ndong, said the students should make adequate preparation of the TMAs as it is significant and that they should be completed independently as part of the test preparation.