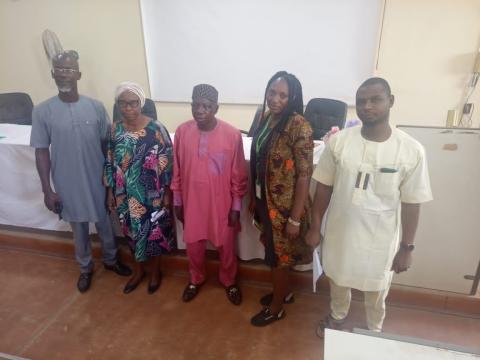 The Director, Special Study Centre for the Nigerian Air Force (NAF) Base, Kaduna, Prof. Nda E. Mundi, has said that an advocacy campaign is the prime in achieving students enrolment.

The director stated this during the final phase of the centre's rigorous advocacy activities held at the National Eye Centre, Kaduna.

The final phase of the campaign saw the centre campaigned to the congregation of management and staff of the National Eye Centre and National Ear Care Centre Kaduna, respectively.

Earlier before the campaign visit to the two health formations, the NAF centre had engaged other places like Air Training Command, secondary schools and a host of other government and non-governmental organisations .

Mundi stated that the students enrolment forms one of the topmost goals of the Vice-Chancellor, Professor Olufemi Peters’ agenda that every centre and individual staff must work towards achieving.

Delivering the campaign choir at the National Eye Centre, the director highlighted the historical evolution of the National Open University of Nigeria and clarified the reasons behind establishing the institution.

He further explained that NOUN, like any other universities in the country, is regulated and controlled by the same umbrella of the National Universities Commission (NUC).

He added that despite being regulated by the NUC,  bodies like Commonwealth of Learning (COL), with it headquarters at Vancouver, Canada and African Centre for Distance Education (ACDE), with its headquarters in Nairobi, Kenya further regulate the affairs of NOUN .

The director added that NOUN’s certificate is like a legal tender acceptable everywhere in the world and it is at par with any other university certificate in Nigeria and beyond.

Mundi informed the congregation that approval has been granted by the management for HND holders with upper, lower and pass credit to be admitted into 200 and 300 hundred levels, respectively.

Therefore, he urged them to use the opportunity at their doorstep to harness the bountiful benefits that await them.

The Chief Medical Director, Dr. M. B. Alhassan, who had earlier welcomed the team, appreciated the visit, saying that some of their staff are already studying with the university.

He promised to encourage more and more staff members to enroll for admission.

In related development, similar campaign with the same tune was carried out at the National Ear Care Centre, Kaduna.

The Head of Clinical, Dr. Alfred B. received and welcomed the team to the centre.

The accountant of the NAF centre and the Principal Assistant Registrar of the centre, Mrs. Maryam Kida delivered the advocacy message, respectively

Questions were entertained and answers were appropriately provided.