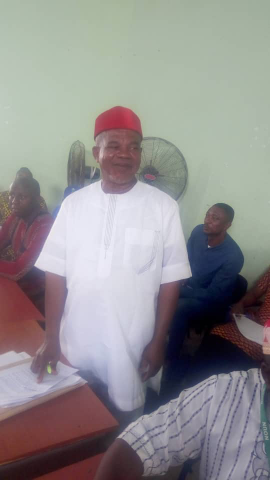 The Coordinator, Southeast conference Marking zone and Dean, Faculty of Education (FOE) Prof. Uchenna Sydney Ajunwa Osuji, has expressed his satisfaction on the successful completion of the conference marking exercise.

He disclosed this in a chat with NOUN news correspondent during the 2021_1 conference marking at Enugu Study Centre, Enugu State.

Osuji also expressed his impression on the doggedness and relentlessness of subject officers in living up to their responsibilities as well as the synergy which existed among them.

While commending the subject officers for their sense of maturity in handling the examiners, he also appreciated the markers for their cooperation and prompt delivery of scripts within the stipulated timeframe.

The dean described the staff as exceptionally good and applauded their harmonious work towards achieving a huge success of the exercise.

According to him, the centre director, Prof. Alexander Uche Onyia, was wonderful for his prompt resolution of issues and provision of needed materials during the conference marking.

He concluded that the success story would not have been possible without the profound role of DMIS & DEA, as there were no hitches recorded.