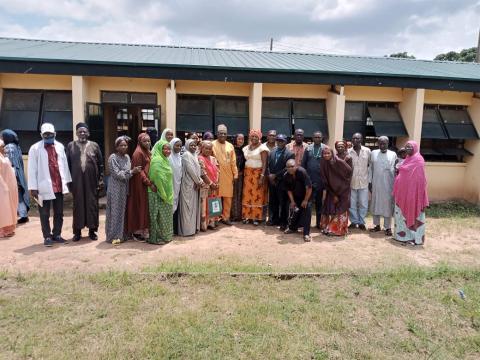 The Director, Kaduna Study Centre, Yusuf Abdullahi, has said that the lingering Academic Staff Union of University's (ASUU) industrial action coupled with line of batches awaiting admission into the conventional universities were some of the reasons for the centre’s intensification of advocacy campaigns in secondary schools.

The director made this statement during a visit to Government Girls Secondary School, Kawo, Kaduna.

Abdullahi said the campaign was aimed at adequately informing the secondary school students on the verge of graduating on the National Open University of Nigeria (NOUN) as an alternative source of university knowledge.

He said they were at the school to also intimate them about its existence and mode of the university’s operation by outlining the numerous benefits os studying at the university.

The centre director further elaborated on the three basic philosophies of affordability, accessibility and flexibility to which the university operates.

The director added that like other universities, NOUN is also being regulated by the National Universities Commission (NUC) and all its programmes have attained full accreditation.

He maintained that the university and its certificates have received and have global recognition and urged both the staff and students to use the opportunity and enroll.

On her part, the Principal of the school Mrs. Ruth Nuhu, who earlier welcomed the NOUN team, appreciated the visit, saying that their coming was meant “for the development of education in Kaduna State and the country at large.”

She promised to continue to encourage both staff and students to enroll as this is a welcomed development.

The staff and the students raised relevant questions which mostly centred about the NYSC, course duration, programmes and acceptability of the certificates, which were adequately responded and addressed by the director of the centre.