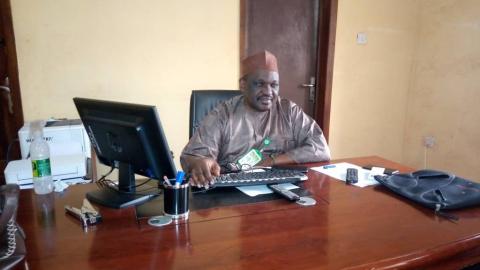 Ikpe stated this during a chat with NOUN News correspondent in his office, Otukpo, Benue State, where he said that it has been his intention to woo more students and reach the unreached with the aim of increasing the population of students.

The director said being that Open and Distance Learning (ODL) is the rave of the moment and the new mode of learning globally, there was need to engage the people with word of mouth to tell them what they intend to benefit and why they should embrace the NOUN system of education.

For an effective advocacy campaign, therefore, Ikpe explained that going to the grassroots to talk to the people is actually more convincing as their misgivings and questions are answered instantly.

“For advocacy campaign to reach the local communities, the centres in the local areas need to use the local radio stations that can reach the grassroots in their environments,” he said.

The director said with his past experience as the centre director in other places like Makurdi, Ugbokolo and Sokoto, he remains optimistic that the experiences will enhance his performance in Otukpo.

While appreciating the Vice-Chancellor, Prof. Olufemi Peters, whom he described as “a working ODL encyclopedia,” Ikpe assured that Peters will take the university to an enviable height.

With the present technological advancement, he urged the university  management to look into the provision of computers and making available internet connectivity so that the centre, too, can take advantage of the technologies to mediate teaching and learning.

He recommended that the university should look into having a centralised internet system whereby all centres will be linked with each other, sourcing their data individually from service providers, which usually has connectivity problems.

He also commended the staff of the centre for having a good rapport with the students, saying that he always tells them that the students are their bosses while they have a job because of them and that since his arrival at the centre he had not received any complaint about any staff.

Ikpe then disclosed that Otukpo centre is in need of more staff in the area of ICT and security personnel, citing the recent vandilisation of the electrical fittings shortly before the last examination due to the inadequate security personnel, coupled with the vast land the centre has.

The director also appealed the university management and urged them to look into the issue of infrastructure in the centre, which needs renovation, and the need for new software, computers and text materials.