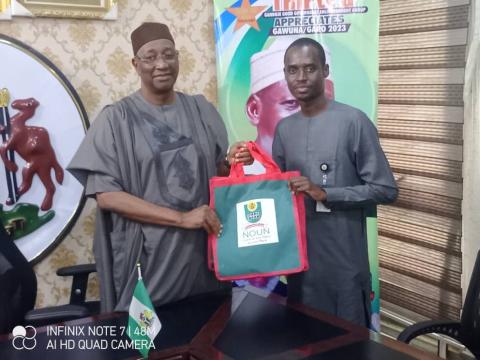 The Kano State Commissioner for Information, Malam Muhammad Garba, has assured the management of the National Open University of Nigeria (NOUN) of the state government's readiness to partner with the institution to boost education in the state and the country at general.

The commissioner explained that the university has a conducive learning atmosphere where people who are very busy can study from wherever they are and easily complete their studies online.

He said NOUN provides opportunity for different categories of people to work while studying, which is one of the aims and objectives of establishing the institution.

Earlier while briefing the commissioner, the study centre director, said the purpose of the visit was to strengthen the relationship between NOUN and the state government.

He said the university has other three centres in KANO metropolis which include Fagge, Kwachiri and the mega centre at Sauna, while thirteen at the outskirts of the metropolis, and having all their programmes and courses fully accredited.

Alasan added that NOUN is an Open and Distance Learning (ODL) institution that has the largest number of students in Nigerisa, stressing that it is not a member of the Academic Staff Union of Universities (ASUU) as the university do not go on strike.

The director further disclosed that a student could get admission with five 0-level credits result provided there is a credit in English and Mathematics without JAMB examination.

During the visit, the director presented the commissioner with NOUN souvenir.