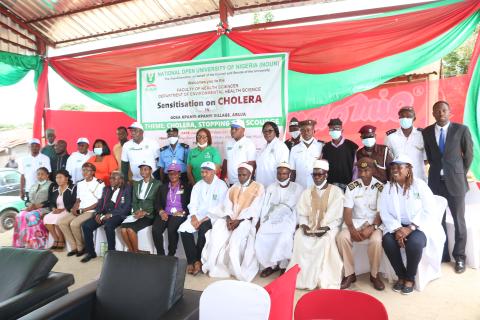 Determined to subdue the recent cholera outbreak in communities within the Federal Capital Territory Abuja (FCT), the National Open University of Nigeria (NOUN), in collaboration with the FCT administration have taken a step towards creating awareness and sensitising communities against infection.

The university, through its Department of Environmental Health Science, Faculty of Health Sciences, on Wednesday, September 15, 2021, organised a sensitisation held at the community’s Chief Palace, Gosa Kpanyi-Kpanyi, FCT Abuja.

With a theme: “Cholera: Stopping the Scourge, the community, with about 5,000 dwellers were sensitised and provided with proper information on how the disease can be avoided and prevented from spreading.

The programme was sequel to a suspected high incidence of cholera outbreak as indicated by the village head of Gosa Kpanyi-Kpanyi Community, whose daughter was diagnosed with cholera and was hospitalised on Monday, 12th July 2021.

In her goodwill message, the Hon. Minister of State for Environment, Barr. Sharon Ikeazor, commended NOUN for a laudable initiative of an intervention programme in Kpanyi –Kpanyi community.

“Cholera outbreak has been more of reactive approach instead of proactive and I must commend the National Open University of Nigeria for leaving its four walls of the university to take this up as a challenge to assist the government and its citizenry in risk communication and community engagement on cholera,’’ she said.

“This is a collective responsibility which requires concerted efforts of all and sundry. This is the only way we can prevent and curtail incidences of cholera outbreak and the communicable diseases,’’ she added.

Earlier, the Vice-Chancellor, Prof. Olufemi Peters, commended the faculty and the department for taking the bold step to sensitise the community and its environs on the required information they need to keep themselves from getting infected.

Represented by the Deputy Vice-Chancellor (Academic), Prof. Uduma Oji Uduma, the VC referred to a scientist John Snow who established the John Snow Pump in 1854 when people were killed by cholera.

Snow, he said, destroyed the pump that circulated dirty water and established another pump called Snow Pump, which, according to him, is a broad step to public health and which the department has keyed-in to in stopping cholera.

He further stated that cholera has become a worrisome scourge that must be eradicated especially with the rising cases of infections and deaths, adding that the sensitisation is key in a bid to help prevent scourge of cholera, which has been ravaging communities in FCT.

The Ag. Head of the Department, Dr. Oluremi Saliu, stated that the objective of the sensitisation was to orient the communities, particularly women and children about cholera, provide information on how it can be avoided and prevented from spreading, provide information on how to manage a person that is infected and reinforce understanding of linkages between their environment, hygiene and health.

District Head of Gosa, Mr. Eshuik Nana, in his address, expressed gratitude to NOUN, the FCTA and other stakeholders for the sensitisation programme.

Nana who was filled with excitement, assured all and sundry that the message will be taken home and implemented as taught.

He further implored the FGN through NOUN to come to their aid in providing necessary amenities: healthcare services, portable water, public toilets, electricity, amongst others, to keep them away from getting infected and saving lives.

Meanwhile, the department, alongside the FCTA have presented to the community hand sanitisers, ORS sachets and small tablet bar soaps, amongst others.

Highpoint of the event was the drama presentation and dance by the NOUN troupe as well the community dance troupe to entertain the guests.

Hygiene demonstration of washing hand and preparation of ORS to save life were also demonstrated at the event that witnessed a large turnout of the residents.