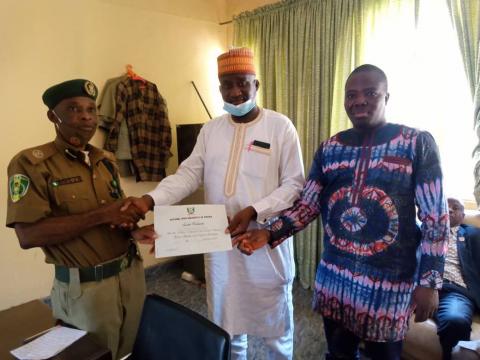 The National Open University of Nigeria has, on Tuesday, June 29th 2021, held a symbolic issuance of certificates to inmate graduates of the university across the special study centres located in seven Correctional Service Centres, following the university’s 9th and 10th Convocation Ceremony in January.

Twenty-three inmates received their graduation certificates at the seven Correctional Centres, where the simultaneous ceremony took place. They are: Kirikiri with eight inmates, Enugu with six, Kuje with four, Keffi with two, while Port-Harcourt, Awka and Kaduna with one inmate each.

In Port Harcourt, the Vice-Chancellor, Prof. Olufemi Peters, charged inmates of the Nigerian Correctional Services (NCS) centres across the country to take advantage of NOUN’s free education scheme for prison inmates in the country to develop themselves in order to adequately position themselves for opportunities that may emerge after they have served out their terms at those facilities.

Peters made the charge on Tuesday at the Maximum Security Custodial Centre in Port Harcourt, Rivers State, through the Registrar, Sir Felix Edoka, who represented him on the occasion of the presentation of certificate to a former inmate of the centre, Mr. Emmanuel Njoku, who studied Mass Communication and graduated with a Second Class (Upper Division) grade.

Edoka revealed that the university had a total of 23 inmate graduates in the just concluded virtual convocation ceremony held on the 29th and 30th January, 2021 with only one from the Port Harcourt correctional facility, while Kirikiri Custodial Centre, Lagos, produced the highest number, eight, this year.

The Vice-Chancellor further urged the Controller-General of Nigerian Correctional Services, Mr. Haliru Nababa, through the deputy controller, Port Harcourt Maximum Security Custodial Centre, Mr. Ibrahim Usman, to encourage inmates who are willing to embrace education to take advantage of the opportunity graciously afforded them to study at the university in order to equip themselves to start life as useful citizens of the country after they have served their terms.

“All inmates of the correctional centres across the country willing to study at NOUN are granted scholarship by the university to study free of charge throughout the duration of their chosen programme.

“Even if they get discharged before they complete the programme, they are allowed to continue with the scholarship out there free of charge for as long as the programme lasts. The thinking of the university management is that it may not be very easy for an inmate who has just been discharged to be immediately employed gainfully to enable them foot the bill of education,” he said.

In reaction, the officer in charge of Port Harcourt Custodial Centre, Deputy Controller Ibrahim Usman, said it is a very noble achievement for someone who has been in incarceration for years to study and earn a university degree while in detention.

“It is a major vision of the Nigerian Correctional Services that by the time an inmate would be leaving the custodial centre, he should be better equipped to be reintegrated into the society. Education is one of the cardinal tools for the reformation of persons in custody and the National Open University of Nigeria has made itself a very willing tool to assist us in achieving that,” he said.

On his part, a highly elated Emmanuel Njoku expressed gratitude to God for enabling him clinch a good achievement even when all hopes were lost.

“I want to urge other inmates here to avail themselves of this opportunity that NOUN has brought to them so as to make their lives better, and they will come out of this place as better citizens that will help reshape the greatness of this country,” he said.

At the Kaduna Correctional Centre, Mr. Eradiri Torukurobo, a "Death-Row" inmate has bagged a degree in Peace and Conflict Studies, with Lower, Second Class Honour and presented with the certificate.

The certificate was received on behalf of the inmate by the Controller of Correctional Service, Kaduna Command, Mr. Ibrahim Labbo, who was also represented by his assistant, Mr. Idoko John Emeh.

Speaking at the ceremony, the director, Kaduna Study Centre, Dr. Aminu Umar, explained that a certificate is what authenticate what a student earns from the university.

Umar said he was at the command to present the certificate on behalf of the Vice-Chancellor of the university, Prof. Olufemi Peters for onward transmission to the graduate.

He informed that the certificate presentation was a historic one as it was the first time the Kaduna Correctional Service facility is graduating a student in this partnership.

“Therefore, on behalf of the Vice-Chancellor, National Open University of Nigeria, the certificate was presented for onward transmission to the graduate,” he stated, while handing over the certificate.

Receiving the certificate, the representative of the Controller, Kaduna Command of the Correctional Service, Mr. Idoko John Ameh, assured that in the next few years, a number of the inmates would enroll in some of the university’s programmes.

"When my colleagues came to me to tell me that this is what is all about to happen it was like a day-dream. (But) When I am able to touch the certificate and saw the genuineness of it, I then realized that it is actually a reality," he said.

He expressed optimism that the Kaduna Correctional Centre will supersede and overtake Kirikiri in Lagos in terms of the number of enrollment and graduations.

“Therefore, on behalf of the Controller, Kaduna State Command, the entire staff and inmates, I extend our profound gratitude to the National Open University of Nigeria for the great gesture it is offering to humanity,” Ameh said.

In Lagos, where eight inmate graduates received their certificates, the story was an emotional one for the new graduates of the National Open University of Nigeria (NOUN) Special Study Center, Kirikiri Maximum Correctional Center, Apapa Lagos.

The visibly-excited inmates all turned up looking dashing and beautiful in their graduation gowns, ready to receive their certificates. 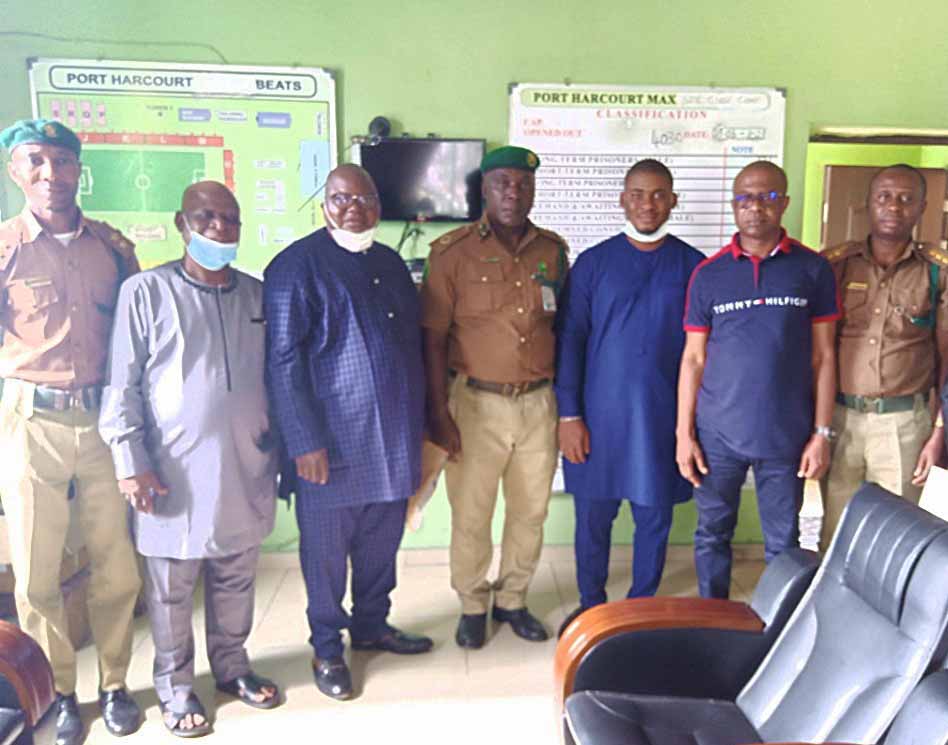 The trio of Aelo, Chibueze and Chinyere have all graduated with Second Class, upper-division.

The Controller-General of Correctional Services, Haliru Nababa, represented by the Lagos Controller General, Adewale Francis Adebisi, commended the inmates for their hard work and dedication towards their studies, describing the day as is a true testament of their determination towards bettering their lives.

On his part, the Vice-Chancellor, represented by the Principal Assistant Registrar, Mr. Adekunle Okhogbe, extolled the inmates for being steadfast in their journey towards academic success and the pursuit of knowledge.

He said it was a well-deserved achievement, one that many outside the walls of the correctional facility are trying hard to attain.

Okhogbe also encouraged the graduates to further ahead with their studies, saying that those with BSc should move for MSc and those with MSc should commence their Doctorate programmes.

For the graduating inmates as well as their friends and family, it was a rollercoaster of emotions, a mixture of joy, satisfaction and anticipation.

This was reflected in the vote of thanks delivered by one of them, Chibueze Nweke, who thanked the officers at the correctional center for the support during their study.

The inmate also applauded NOUN as he expressed his heartfelt appreciation, on behalf of his graduating colleagues, for providing them with this life-changing chance to enrich themselves academically and make something great of their lives.

The coordinator of the centre, Mr. Agboola Sunday, was accorded special recognition for his tireless assistance and encouragement, making sure that the inmates do not lack guidance in their academic journey.

Inmate graduates at Enugu were presented with their certificates by the representative of the Vice-Chancellor, and the Enugu Study Centre director, Prof. Alexander Uche Onyia.

Onyia said the ceremony was for those who graduated during the combined 9th & 10th Convocation Ceremony of the institution held virtually on Saturday, 30th January, 2021, at the university's headquarters, in Jabi, Abuja.

The controller of Enugu Correctional Service, Mr. Onokohomom Godwin Olufasa, expressed his appreciation to the VC and his management team for the establishment of the centre, where inmates could use the platform to be reformed educationally and noted that such educational acquisition forms part of the condition for granting inmates amnesty.

The Desk Officer, Mr. ILoafonsi Kelvin, described the event as another landmark in their match towards ensuring reformation, rehabilitation and reintegration of discharged inmates into a larger society.

The Registrar of NOUN, Mr. Felix Edoka, was represented by the Deputy Bursar, Dr. Paul Akoma at the event.

Among others, the Principal Accountant, Mr. Beneth Ezieke and the Administrative Officer II, Miss Chiamaka Okoye, were present at the ceremony.

In his opening address, the Vice-Chancellor, Prof. Olufemi Peters represented by the Deputy Registrar, Mr. Osebi Olagboye said: "we are here today to issue you these certificates in keeping with the mandates of the National Open University of Nigeria (NOUN).

"As you are all aware, our core mandates are to make education accessible, affordable and flexible to every Nigerian. Taking education to inmates at Nigerian Correctional Centres is completely free of charge and this is part of our efforts in contributing to the upliftment and development of human capital in Nigeria and the society at large," Olagboye said.

In his welcome address, the Assistant Control of Correction (ACC), Mr. Raphael S. Kaigama who spoke on behalf the Controller of Correction, Nigerian Correctional Service, Nasarawa State Command, thanked NOUN for its kind gesture in keeping with its mandates as well as its magnanimity in making education free for inmates in Nigeria.

"It is my great pleasure and privilege to welcome all of you to this historic occasion. Today's ceremony marks the culmination of the first anniversary celebration of the National Open University of Nigeria Special Study Centre, Keffi in regard to convocation.

"On behalf of the entire staff and inmates of Nigeria Correctional Service Keffi New Custodial Centre, I thank the management of National Open University of Nigeria (NOUN) for her kind gesture by being part of the reformation programme of the Nigerian Correctional Service thereby providing 100 percent rebate to our inmates to study various programmes via distance learning," Kaigama said.

The excited graduate inmates could not hide their feelings. While appreciating NOUN and Nigerian Correctional Service on behalf of his colleagues for their positive contributions to their lives, Mr. Ayodele Lebi James who bagged MSc Business Administration said: "It is a great privilege to study while incarceration and I encourage my fellow colleagues to take it serious. There is nothing outside. Stay away from crime. May God help us," he stressed.