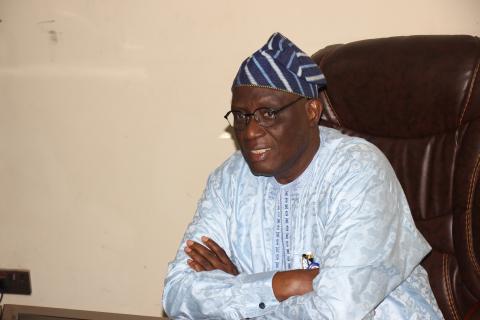 Peters made this commendation in his office on Thursday, August 4, 2022, while playing host to the Regional Media Officers of the directorate and other media staff led by the director, Malam Ibrahim Sheme.

“I am glad with the directorate. You have done well in publicising the university and tackling bad press about the institution,” the Vice-Chancellor said.

He also commended the six Regional Media Officers from geopolitical zones for their relentless efforts in making sure that information about the study centres is being publicised, which, he said, gives him a first-hand information of what is happening in the study centres of the university.

The Vice-Chancellor further eulogised the director for his selflessness leadership style in leading the media team with his wealth of experience in journalism. “He is a man I enjoy working with as he is not frivolous and wise in his sayings.”

Peters particularly expressed delight at the operation of NOUN Radio, 105.9fm, which, he said, he listens every time he is in Lagos.

Earlier in his address, the director thanked the Vice-Chancellor for his benevolence towards the directorate since assumption of office.

“I sincerely appreciate your concerns towards the directorate with regards to the regional media officers, the radio station, magazine publication, among others. We are grateful Sir,” he said.

Sheme also intimated the VC on how the regional media positions came about in the university, and underscored their importance in each of the six geopolitical zones of the country.

He further identified some challenges the officers continue to face in their regions, even as he pleaded with the VC to intervene for them to discharge their assigned responsibilities as expected.

On their part, the officers thanked the VC for his kind gesture and particularly re-echoed plea of the director in requesting the Vice-Chancellor to address their challenges to enable them carry out their responsibilities hitch-free.