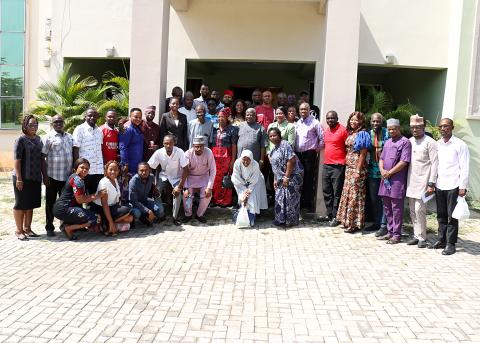 Group photograph of IT staff and well-wishers

It was indeed a mixed feelings as the first director of Information, Communication, Technology (ICT), National Open University of Nigeria (NOUN), Mr. Emmanuel Eseyin, officially retired from the services of the university.

Eseyin bowed out as he  attained the official retirement age.

Speaking during a send-off organised by his colleagues and friends in NOUN, which took place on the 24th of November 2022 at the university’s headquarters in Jabi Abuja, the Deputy Vice-Chancellor Administration (DVC-Admin.), Prof. Isaac Sammani Butswat, commended Mr. Eseyin for his exceptional work ethic during his time with NOUN.

Butswat particularly spotlighted how the former director was able to transform the ICT department and also raise people who have continued in his footsteps and are doing very well.

According to him, Mr. Eseyin is a trail blazer, reliable, resourceful and productive individual who deserves to be honored.

"I am honoured to have been invited to honour my dear colleague and friend, and I commend ICT for putting this event together; Mr. Eseyin deserves it and much more," he added.

In her own speech, the Deputy Vice-Chancellor of Technology, Innovation, and Research (TIR), Prof. Monioluwa Olaniyi, congratulated Mr. Eseyin on his retirement from service and said that the university appreciated him and all the work that he has been doing in the IT community.

Prof. Monioluwa stated that Mr. Eseyin had implemented certain structures that had made running the university smoother, and even in retirement, he is still pushing for how the university can be better.

"He is leaving with a legacy that will not be forgotten," she added.

The university's Librarian, Dr. Angela Okpala,
while presenting the gifts to Mr. Emmanuel Eseyin on behalf of the university's IT community, thanked him for the dedication, commitment, love, and resilience that he showed in his years of service.

The celebrant, Mr. Eseyin, in his response thanked everyone for the honor and love shown to him and encouraged his colleagues to stay dedicated and transparent in everything they do.

Meanwhile the high point pf the event was prayers and commendations given by his colleagues and friends, thanking him for his exemplary leadership and a job well done.