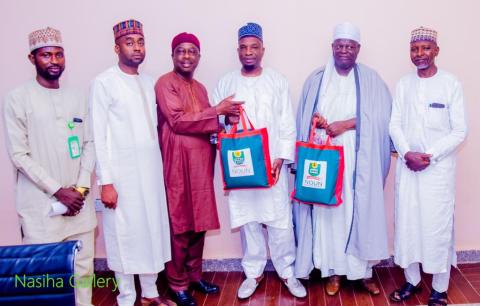 The Management of Gusau Study Centre has paid a visit to the Deputy Governor, Zamfara State, Senator Hassan Muhammad Gusau, in his office at the state’s capital.

The visit, according to the director of the centre, Dr. Atuma Okpara, was aimed at expressing the management’s gratitude on the good gesture portrayed by the state government that allocated a plot of land for the construction of a befitting NOUN centre.

Okpara also explained that they were in the office to remind the state government to fulfil its pledge of constructing and furnishing the centre, as well as sponsoring 200 indigenes of the state to study various programmes in NOUN.

The promise, the director added, was made by the Executive Governor of the state, His Excellency, Muhammad Bello Mutawalle, when he paid a courtesy visit on the former Vice-Chancellor, Prof. Abdalla Uba Adamu, on August 20, 2020 at the university headquarters.

NOUN News recalled that the Gusau Study Centre has temporarily been situated at Commissioners Quarters, a residential building in Gusau.

The director appealed to the deputy governor to facilitate and intervene for the commencement of the construction as promised by the governor.

He called on the his host to use his good office and lead the progress of the study centre, urging him to sponsor and enroll some of the indigenes into the institution.

In his remarks, the deputy governor expressed his gratitude to the management of the centre for being the first to call on his office since his assumption as deputy governor.

He promised to facilitate all it requires towards the actualisation of all the study centre's needs.

In a related development, HRH, the Emir of Dansadau, Alhaji Garba Muhammad II and his entire council members have visited the study centre in Gusau.

The emir’s entourage included the member, Zamfara State House of Assembly, representing, Maru-south, Hon. Kabiru Hashimu Dansadau, who were received by the director in his office.

In his welcome address, the director informed them of the various programmes being offered by the university ranging from first degrees to doctorate degrees.

He highlighted the opportunities brought by the university and the need to harness them.

On the other hand, he outlined the challenges facing the study centre, among which are befitting centre's accommodation, low student enrollment and a host of others.

Okpara further informed the emir and his entourage the skills acquisition programme of the NOUN CHRD in Kaduna.

He, therefore, called on the emir to do all he could to ensure skills development among the indigenes of the state through the NOUN Centre for Human Resource Development.

Responding, the emir thanked the director for all the efforts he is making geared towards the progress of the centre and the education in the state.

He assured that he will use his position being the emir and former permanent secretary who facilitated and supervised the take-off of the Sokoto State University.

The emir promised to encourage and enroll some indigenes of his emirate into the university, even as he expressed hope of establishing a community study centre in his emirate.