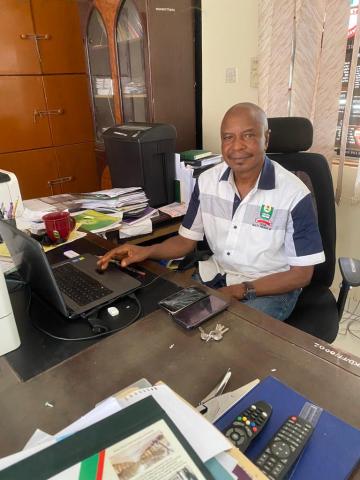 The Director, Makurdi Study Centre, Prof. Fidel Okopi, has said that certain changes introduced in the centre have effectively turned around the fortune of the study centre attracting prospective students, thereby increasing its enrollment figures.

He said this during a chart with NOUN News correspondent in his office in Makurdi, Benue State, where the director disclosed that he had to be firm to bring the changes from what it used to be in the past.

Okopi, a professor of counselling psychology, said due to these visible changes students can testify that things are now being done differently, which, in turn, helped in boosting the confidence of students, even as they continue to encourage others to enroll.

“When students come for enquiries and are satisfied with the information they are given, they in turn tell their families and friends about the university,” he said.

The director added that he encouraged students during orientation to write petitions against any staff they have issues with, so that he can forward to the headquarters and with that it has helped in staff sitting up and doing their duties accordingly.

Okopi also attributed the increase in the students population to the fact that the National Open University of Nigeria is getting more prominence with the aid of the ongoing ASUU strike and the fact that students are guaranteed of graduating in record time.

“Among other things, the ASUU strike is one of the contributors of why students make the choice of coming to study with NOUN, knowing that they can come and graduate in record time,” he said.

He, however, expressed concern about the lack of academic staff at the centre, which has put much pressure on him as the only academic staff, making him acts as facilitator, coordinating about five courses and also supervising B.Sc., Masters and Postgraduate students.

In order for the work load at the centre to reduce, Okopi advised the management to make available academic staff at the centre for smooth running of activities due to the nature of students of the university.

As someone who has a decade-long experience in the Directorate of Learner Support Services, and also worked in the Quality Assurance Unit, Faculty of Education and director for six different centres of NOUN, Okopi believes that he is the most experienced director because of his vast experience, background, qualification and specialisation that served as the catalysts to manage the centre effectively.

In the advocacy front, the centre, according to him, make use of the state’s FM stations for advertisements and when people come for enquiries, they get satisfied with the information given, which helps in wooing more and more people to the centre.

With availability of  funds, the director added that the centre needs posters, additional flyers and roll-up banners to be placed at strategic places around the catchment areas for advocacy purposes.

He expressed his gratitude to the university management for being very supportive to the centre in terms of renovation and putting it into better use.