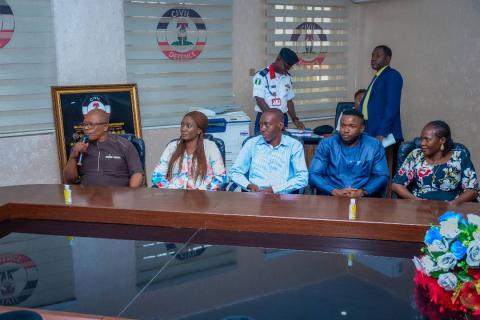 L-R: Ag:Centre Director (NSCDC), Dr. Paul Ifeanyi and some members of staff during the courtesy visit

The gesture was aimed at minimizing the accommodation problem facing the centre.

Audi also added that plans are underway to build another befitting auditorium next year to reduce the challenge of limited office space and examination hall as a result of the growing population of the Study Centre's student.

Audi disclosed this while the Acting Centre Director of Special Study Centre, Dr. Paul Ifeanyi as well as some members of his staff paid him (Commandant General) a courtesy visit on Monday, 28th November, 2022 in his office.

The Commandant General, while thanking the Acting Director and as well as his team for the visit assured his visitors of immediate drafting and signing of a Memorandum of Understanding (MOU) between the two institutions.

“I encourage my staff to avail themselves opportunity and to take advantage of NOUN. I am happy that a lot of my staff are enrolled in NOUN. I am proud that the Corps has over 30 PhDs and counting”, the Commandant General of NSCDC said.

Dr.Ifeanyi thanked his host for for his kind gesture, accommodation, unalloyed support and assistance towards the success of NOUN adding that since the resuscitation of NOUN in 2002, just a year before NSCDC came into being, NOUN has grown from strength to strength with over 114 study centres across the country.

Going down memory lane, Ifeanyi said that the NSCDC Study Centre was established in 2010 and the centre has since then enjoyed cordial relationship with the corps.

Speaking further, the Acting Director stated that "while NSCDC has the mandate of fighting insecurity, NOUN fights illiteracy by bringing education to the doorstep of every Nigerian irrespective of age, distance, creed, among others".